He may not have resigned on the grounds of being a terrible, authoritarian Home Secretary and it may be sad that his personal life was dragged into the public arena, but... I feel like cracking open a bottle.

Nope, not one of these "Why are they in the shops already?" whinges, but a complaint about the way DVD Easter eggs are marketed.

For the unitiated, DVD Easter eggs are hidden extras concealed within the menus (or "interactive menus", as they called when a low-extra disc is trying to sound exciting). They have evolved from computer software Easter Eggs, which typically produced an amusing message or a photo of the programmers if a certain key combination was used.

I have no problem with Easter eggs per se; indeed, some are little gems. But what irritates me is when they are cited on the DVD box as a selling point.

The whole point of Easter eggs is that they are frivolous and hidden. If the contents are worthy of being a selling point - i.e., I'm paying for them - then they should be easily accessible and not concealed on the third language setup screen. If they are proper Easter eggs, they should be for fun only and not advertised!

A better adaptation - that's all I ask of you

Following my recent trip to see The Phantom of the Opera in the West End, and against my better judgement, I went on Friday to see the film adaptation of the musical. It was directed by Joel Schumacher - he of the rubbish Batman films.

I tried to set my preconceptions aside, but despite this I came away deeply unimpressed. The first moment of song seems out of place, as if you suddenly discover you're watching a musical, and the construction and direction deserve the blame.

The direction was dreary and in places confusing and there seemed little imagination employed in the switch from stage to screen. One particular scene that works well in the theatre - where candles rise up from the stage as the Phantom and Christine arrive in his lair, a necessity due to the changing set - is replicated almost identically, resulting in the bizarre effect of lit candles emerging from water.

Everything seems slower on screen. The ballads are tedious and, to quote the Observer reviewer who had the same experience, you can't help but "pass the time during the over-orchestrated numbers guessing what the rhymes are going to be and being right 95 per cent of the time." The film itself drags terribly.

The Phantom is poor in pretty much every way. When his supposedly hideous face is revealed, rather than a monstrosity of skin and bone we are presented with a slight scalding. And what deformation there is was all too clearly not present in the previous scene, as revealed by a badly designed mask with over large eye holes. The Phantom should be a virtuoso singer, kept off the stage by his appearance. In the case of Gerard Butler's Phantom, his voice would be reason enough. (His voice and some of the brass instruments suffered distortion, but I'll be charitable and blame that on the cinema reproduction equipment rather than the filmmakers.) The actors in the stage version are due credit for their live performances. When the songs have been pre-recorded in a studio, there is no excuse for a flawed performance.

Emmy Rossum as Christine is not bad but she isn't quite operatic enough for the role. At least Ciaran Hinds and Miranda Richardson are good (although for some reason she is the only one of the French characters to sport a French accent) and Minnie Driver was entertaining if, in my opinion, entirely wrong for the role of operatic prima donna.

The Phantom of the Opera: The Movie is an opportunity missed. Insufficiently adapted from the version written for the stage, blandly directed and dull in too many places, this film is worth a wide berth.

I'm currently on a train, eating an all day breakfast ciabatta - so called, of course, after the journey time from London to Edinburgh when there are Sunday engineering works.

Guess who's coming to campus

I read on Ceefax this morning that a certain eminent politician was giving a speech in Edinburgh today. I got to work to find the campus swarming with police and realised it was here.

He turned up, flanked by Jack McConnell MSP, Alistair Darling MP, Napier's Principal Joan Stringer and secret service men with curly ear pieces. He kept moving as I (and the largest group of camera phone users I've ever seen) snapped away and is therefore a little blurry... 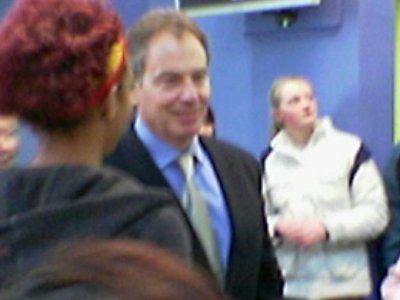 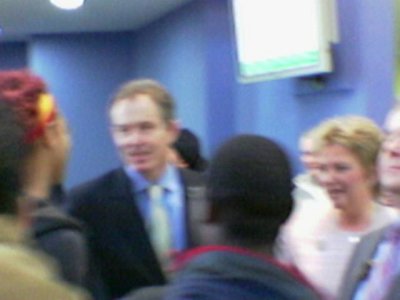 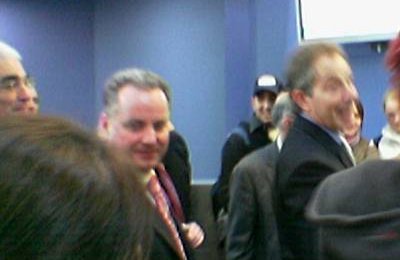 On the way to work, I pass a company called Dalton Scrap. Each morning, their gates are wide open revealing the unfortunate way their name has been painted: 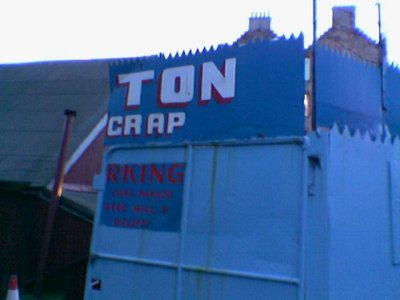 An email from Julian Todd at Public Whip directs me to a fantastic new applet:

"We're proud to report that we have made an animated ministerial history of Tony Blair's government.

Press the reshuffle button and watch them fly around the screen!

Now that they have information about the holders of ministerial office, they have also added this to voting records so that you can see which MPs particpating in a division were part of the payroll vote.