Apologies for lack of political blogging of late. For now, a pleasing report that the Commons Home Affairs Select Committee has labelled Blunkett's ID card plan "badly thought out", a mention to the Prepare for Emergencies spoof site (via just about everyone, but here's what Nick has to say), and a note that the Hartlepool by-election is now in full swing, but we still don't know when it will be.

Meanwhile, I topped a week in which I built a bed by changing a fuse and restoring electricity to the house - although I suspect sticking a screwdriver into a live fuse box wasn't the most sensible way to do it. Still, when the attack comes, this electrical knowledge will stand me in good stead.

The headboard has its flaws, but I've managed to build my bed. It seems reasonably stable, although my hands hurt from screwing in so many screws.

I'm off to sleep now. If the bed collapses in the night, you'll hear of it here first. (Unless you live downstairs, I guess, in which case you'll hear a very loud bang, and probably a yelp.)

Having borrowed some tools from work, I have begun attempting to assemble my bed from Argos. It's not going well ("catalogue of disasters" gag coming soon). I've only got as far as the headboard and the holes for slotting the dowels in (the other ends of the dowels being in the headboard slats) are so poorly located that it isn't just difficult matching them up, it's a physical impossibility.

I may need a drill.

This is a customer announcement. Will the gentleman visiting this site from Endemol in the Netherlands please make himself known to the site manager via will.howells@ldys.org.uk

The Comedian Richard Herring has completed the game of CNPS (see http://www.richardherring.com/cnps-stats.php) by reaching the magical 999.

Off to London again this weekend with three consecutive commmittee meetings on Sunday, all for LDYS. I was only elected on to one of them - the other two I'm on by virtue of being elected to other committees.

I don't even like committee meetings. And I'm chairing one of them.

Bow down before me, puny mortals (except maybe Ian from Memory Bank) for I have completed the Grauniad crossword!

I picked up my paper at lunchtime and it confirmed that my answers to yesterday's cryptic crossword were correct. I did it on the train back from Bristol with no help from dictionaries, Google or online crossword solvers. At this rate, I might manage such a feat again early in 2005.

It's Araucaria today so I have little hope of progressing beyond the two clues I've solved so far.

Thanks to Chris Edwards for these photos of me on TV yesterday. Once I've got hold of a copy of the show (I've not seen it yet!), I'll post up some screen grabs.

If I look moody, it's because I was concentrating really hard... 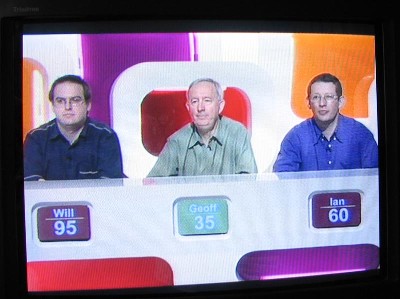 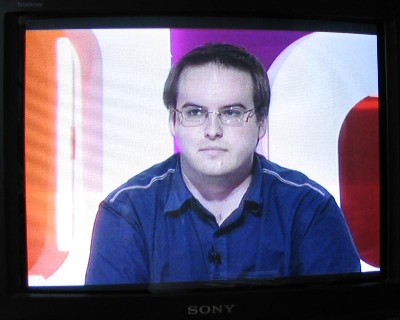 I'll probably forget my own name

I'm off to Bristol this evening in preparation for yet another quiz show appearance tomorrow. This time it's Memory Bank on Five (the channel formerly known as Channel 5), and once again it's live.

The show has some general knowledge elements, but much of it involves remembering and recalling images. You'd think, if you knew me, that I'd be particularly good at that, but I'm concerned I'll go completely blank. 15-to-1 was so much more straightforward.

Does whatever a spider can

The sequel to the pretty average Spider-Man begins promisingly: the titles remind the viewer of the plot of that film while recognising the franchise's comic book origins. But the movie quickly goes downhill: the obvious failure of Dr Octavius's "inhibitor" is rammed home too hard to even be knowingly obvious, and the plot descends into repetitious action sequences, hackneyed, lecturing speeches, and trite romance. Over and over again.

When it wants to be funny, the film does pull it off, most notably in the lift scene. It is sometimes successfully self-parodying (e.g., the "eight limbs" gag) and gets away with some of the more ridiculous plot elements by playing on the established rules of superhero comics. There is a nice little cameo by Stan Lee, and the highlight must be Alfred Molina playing Matthew Corbett to his tentacle Sooty (although the "Kill him, you say?" dialogue is perhaps more reminiscent of Chris Barrie and Mr Flibble in Quarantine).

By the end, and running around thirty minutes too long, the film is a disappointment. And, while I don't want to sound like Mary Whitehouse, with Captain Picard's girlfriend from Insurrection being killed by a shard of glass and a severed limb, Evil Dead style, holding a chainsaw, no amount of patronising moralising should have got this a PG certificate.

You probably wouldn't wear it

Val Jones Nursery in Leicester are auctioning the yellow tie worn by Charles Kennedy during his televised speech at at the Leicester South rally last Tuesday. It's signed by Charles and comes with a declaration of authenticity.

Funds raised will help buy toys for the nursery. To bid, visit the auction on eBay.

(Also available are autographed ties worn by Liam Fox and Gordon Brown on the campaign trail.)

The full story is in today's Leicester Mercury.

No photos from Leicester

I had my camera with me in Leicester but I was too busy campaigning to use it (did I mention we won?), so to make up for it, here's a photo of newly re-elected MEP Diana Wallis, from her newsletter, at the Yorkshire and Humber Euro election count on June 12th. And who's that peering over Diana's left shoulder...? (There is a smaller, colour version on Diana's website.) 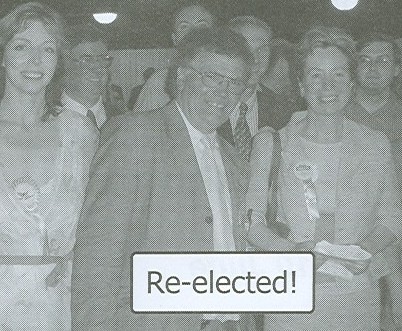 Last night I watched The Secret Agent, an exposé of the BNP by an undercover BBC journalist based in Bradford, and was quite surprised to see footage from that very count. Although that could hardly claim to be the most shocking part of the documentary...

Three cheers for Parmjit! (Even though this means my LibDem playing cards are now out of date.) I'm sure he will be an excellent constituency MP, and an asset to our - ever growing - Parliamentary Party.

Bad luck to Nicola Davies who came excrutiatingly close in Birmingham Hodge Hill, although she can be very proud at achieving (by my back of the envelope calculations at 2am, so I may be wrong!) a larger swing than we won with in Leicester South.

A man after my own heart

Ken Jennings, a Mormon software engineer from Utah, is the greatest ever quiz player in TV history. Yesterday his winnings on Jeopardy passed $1m, after winning for 30 consecutive days. Ken says he's going to spend it on DVDs.

Michael White waxes lyrical in today's Guardian about reform of the honours system. It's an amusing article, and not least for this Yes, Minister reference.

The MPs want to do better by all concerned except the automatic CMGs (Call Me God), KCMGs (Kindly Call Me God) and GCMGs (God Calls Me God), so treasured in Whitehall.

The campaign is going at full pelt here in Leicester South. The campaign headquarters was packed yesterday with volunteers who've turned out in force to support Parmjit and the mood was optimistic.

The city is swimming in LibDem diamonds. I've spotted only one or two posters for the Labour candidate and nothing from the Tories. Labour have been putting out some particularly dirty literature (personal and misleading attacks on the other parties, not top shelf magazines). I know we have a habit of saying "the Tories can't win here" (and that's true over so much of the country), but all the signs are that the Conservatives will come a poor third, while it's going to be neck and neck between us and Labour right up to polling day.

I have moved the blog to a plush new server. There should be no big different in appearance except that permalinks will now point to addresses on this server (http://www.willhowells.org.uk/blog and the like) rather than my CIX web space.

With a little inspiration from Peter Black, I've made it into the Yorkshire Evening Post on the subject of the LibDem/Con/Green administration now running Leeds City Council:

It is worrying that several of your correspondents seem unable to accept the results of the local elections (although some of them appear to have neglected to mention that they are Labour councillors who lost their seats, which may be one explanation).

The first-past-the-post electoral system used for council elections had for years given Labour a dominance over Leeds far above its true support amongst voters. Even now, Labour's share of seats is greater than its share of the vote.

The new administration can rightly claim to be the first council leadership in many years to truly have the support of the people of Leeds. Rather than sniping before a single policy decision has been taken, we should give them the chance to prove that pluralist politics can deliver for the city. The signs so far are positive.

Interesting to see that internet access speeds have a new unit of measurement (from BBC News):

GNER, which operates between London Kings Cross, the East Midlands, Yorkshire, the North East and Scotland, said it would provide uninterrupted wi-fi coverage at speeds of up to 125mph.

The advent of wi-fi enabled trains is a very welcome development, but I'm dubious how useful it will be to begin with. With only one suitable train on the East Coast Main Line, it will be tricky (and will require extra research) to adjust journey times to make sure you're on the right train.

I've somehow managed to break the screen on my laptop. I think I may have stood on it (accidentally), which, for an all too obvious reason, was a bad idea.

I'm not au fait with the ins and outs of laptop repair, but I'm assuming I'll be able to get it fixed. How much it will cost is another matter...

And on a completely unrelated note, I'm now the Chair of the LDYS Conference Committee. Yay me. (Unfortunately, my predecessor was - well, is - very knowledgeable, organised and hard-working, which is quite something to live up to.)

Update: Having had a quote, I've decided it would be probably be gratuitiously profligate to get the screen repaired. Although there is damage, most of the screen is still usable and at a high resolution there is more than enough space on the desktop.